By: David Oberstadt /
With: No Comments /
In: eFORMz Tips & Tricks

Printer Job Language (PJL) is a language supported by most PCL printers that lets you add processing commands at the job level. People who use PJL in eFORMz projects typically send finishing commands, such as stapling output.

You can enter PJL commands in the Generated Content’s File or Printer tab of an eDirect Content step: 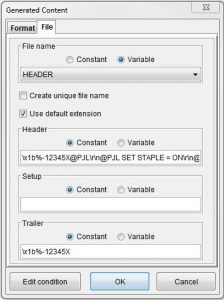 The PJL includes the following parts. The first and last lines are mandatory.

If you want to set custom finishes dynamically you would need to create a custom variable that dynamically changes the settings. For a sample, download the following eFORMz project: ProjectPJL